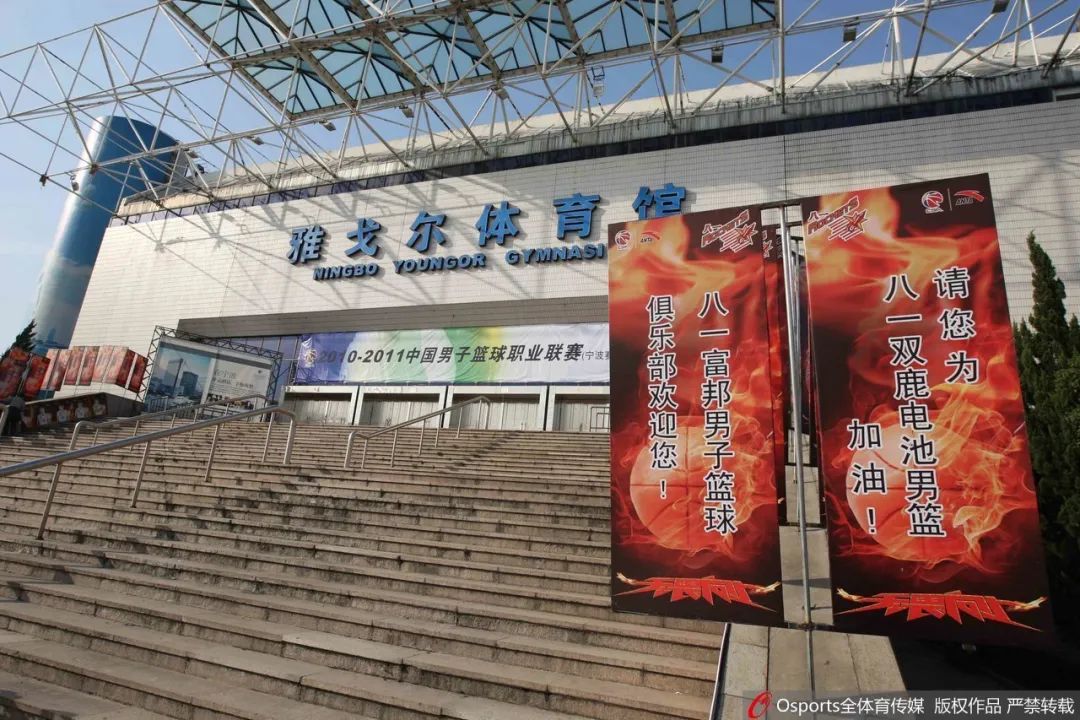 Probably until now, many old Bayi fans still remember the glorious moment that Bayi team created in Ningbo Youngor Stadium that year. It was an indelible scene in the memory of many fans.

Compared with the luxurious home stadiums of many teams today, the Youngor Stadium, which was built in 1994, looks outdated.

In the corner of the stand, the local Lanhun cheerleader waved a red flag with the head of "Che Guevara" to cheer for the players.

In the eyes of the fans, the image of wearing a beret resembles the head coach Ah Te Jiang.

But now, all this must be said goodbye to everyone.

According to multiple sources, the Bayi Men’s Basketball Team has determined that it will not participate in the CBA in the new season, and the team will also announce its disbandment.

The eight championship flags that were hung high on the roof of the stadium can only remain in people's memories in the future.

"The CBA team that has always maintained an all-China class, all of which are Chinese, will never appear again."

Old player Jiao Jian who used to play for the Beijing team wrote:

Jiao Jian’s feelings may be the inner feelings of many people. Those familiar names are synonymous with the glorious past of Bayi.

Bayi Men’s Basketball Team belongs to the Bayi Industrial Team and is the most dazzling star in the most brilliant gold medal factory of modern Chinese sports.

As we all know, sports construction after the founding of the People’s Republic of China is actually rooted in the development of military sports. He Long, Wu Shaozu and others are all soldiers.

As early as during the Anti-Japanese War in Yan'an, basketball in the army developed very well. Unlike football, which has a red team and a yellow team, in the history of China's basketball development, the Bayi men's basketball team has even undertaken the tasks of the national team and participated in foreign wars.

After the creation of CBA and the professionalization of basketball, the Bayi team has won 8 championships.

In those glorious days, the Bayi team's luxurious lineup allowed many teams to surrender without a fight. But now, the poor results that have not changed for years have made them a very special existence in the CBA.

If the results of the Bayi team are connected into a curve, since the Dazhi helped the team win the championship in 2006, the curve has been going all the way down, and finally fell to the bottom. In recent seasons, they have not been able to escape the fate of the league countdown.

The inability to sign a foreign aid team is a system that the Bayi team cannot get rid of.

Why can’t the Bayi team hire foreign aid? This is a question that has been asked thousands of times by the media. But the Bayi team never thinks that this is a problem. The innocent pedigree of the army is their pride. The eight championships that rely on the all-China class to fight is the most powerful refutation.

In desperation, the Basketball Association has specially introduced the "August One Clause" to restrict the use of foreign aid by other teams against the Bayi team and reduce the number of foreign aid users.

But this kind of care cannot improve the Bayi team's weakening strength in the league. Such a cruel reality also made the Bayi men's basketball team finally move towards a destiny.

The golden generation of the eight-time winners has many stories that make everyone remember so far.

At that time, because of the coach’s words, Ah Tejiang would take the ball to the bumpy ground to practice dribbling for a whole year; at that time, Liu Yudong stomped down on the court. I stomped my foot back and went back to work; at that time, whoever left the Bayi training field would be looked down upon by his teammates.

At that time, one championship after another made the Bayi team almost too late to celebrate.

The Chinese media, imitating the NBA's "Bull Dynasty", created a term-"August One Dynasty".

In fact, this dynasty has been around since 1975. The People's Liberation Army, with the Bayi team as the team, won 7 National Games championships in the following 30 years.

Before the establishment of the CBA League in 1995, the history of the Bayi team was half the history of Chinese basketball. When the CBA, the top domestic basketball league, was established, they won the first six championship trophies in one go.

Bayi at that time was simply a myth.

Some fans still remember that on the night of December 17, 1997, Bayi lost 80-83 to the Jiangsu team in the away game. After the game, the Jiangsu team's locker room became a celebration party.

A local radio reporter recalled: "They were all happier than winning the championship!"

Even more incredible is that it was not until the 2006-07 season, the twelfth year of the CBA, that Bayi suffered the first three-game losing streak in team history.

From the glorious past to the loneliness now, this is the impact of the times on the Bayi Men's Basketball Team.

Every offseason, the Bayi team will train at the Hongshankou base near the Summer Palace in Beijing.

30 years ago, if you could enter this door, it meant that your life was fully protected: basic necessities, food, housing, transportation, and work, settled in Beijing in the future, or changed jobs to a place to get a decent job.

Different from the past, players nowadays seem to be less eager for a uniform on a jersey jacket. Many teams have an advantage over Bayi in the training mechanism of the youth team.

Teams like Guangdong and Dongguan have already put a lot of energy into the construction of the youth team. Their club is more professional and the conditions are better.

In contrast, recruiting students for the Bayi team is much more difficult, and fewer and fewer big fish can be caught.

On the one hand, it is the checkbook wielded by the private boss and better career planning and development; on the other hand, the incident of Wang Zhizhi's stay in the United States at the time also made those young players who have imaginative careers hesitated about discipline.

Yes, joining the army used to mean security. When many CBA players retired and went to public security, traffic police, company employees and other positions, the retired players from Bayi could easily obtain civil service positions after changing their jobs.

But now, the salary of the main players of those local professional teams before retirement is enough to make them worry-free for the rest of their lives.

Unlike many players who wanted to join the Bayi Men’s Basketball Team before, players nowadays are more willing to go out and enjoy the high salaries offered by the rich clubs in the professional arena.

Many fans are concerned about the future fate of these players in the previous team after the Bayi Men’s Basketball team withdrew.

According to insiders, the most likely situation now is that all players will become free agents and be claimed by other teams during the window of the new CBA season and sign new clubs.

At present, many players in this Bayi team, including Zou Yuchen and Fu Hao, have become the favorites of various teams.

When the Bayi team just broke the news that they would quit, Zou Yuchen's every move attracted great attention from the outside world.

He suddenly followed the official account of the Xinjiang team on Weibo, and then interacted with Zhai Xiaochuan and Li Muhao on Weibo.

Xinjiang and Shougang have also become his most likely next homes.

Of course, besides Zou Yuchen, Bayi has many outstanding players worthy of other teams' pursuit. A free market battle for Bayi players has already begun.

But I believe that all this will eventually have a satisfactory result.

After the Bayi Men’s Basketball team withdrew, there will be only 19 teams left in the CBA this season. After the withdrawal, the right to participate will be in the hands of Fubon Group.

How they will deal with the right to participate, whether to reorganize the team, or give up the place by transfer, this is still the biggest mystery.

But anyway, we need to look forward. The times are developing and progressing.

The veteran will eventually retire, and then pay a military salute on the sidelines, and then say goodbye.

Their deeds are always in the heart, in the book, in the museum, in the memory.