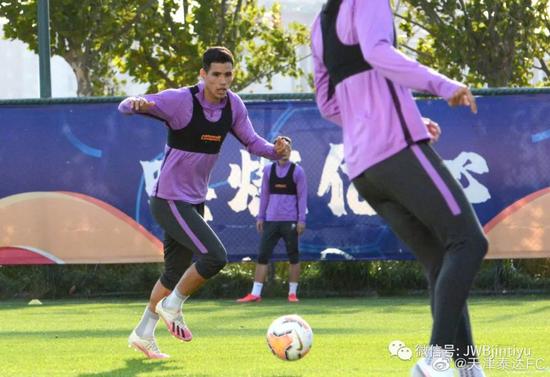 From the Suzhou Division to the Dalian Division, Tianjin TEDA players will inevitably compare the two divisions. The Suzhou competition area is better in terms of accommodation, but due to the southern weather, the venue conditions are not ideal. On the afternoon of October 13th, the Tianjin TEDA team conducted their first training session after arriving in Dalian. The conditions of the venue made the team quite satisfied. Both the flatness and the length of the turf were sufficient to ensure the training of the team. The current outdoor temperature in Dalian is slightly lower than that in Tianjin, making Tianjin TEDA more comfortable.

After moving into the Dalian Division, the job of the Tianjin TEDA team is relatively simple, that is, to prepare for the upcoming relegation battle of the Chinese Super League. According to the requirements, Ticino Suarez, who had just joined the team, took a makeup photo on the evening of October 13. The young man was still unsmiling, just like his style on the field. After arriving in Dalian, Ticino Suarez said in an interview with an official Chinese Super League reporter:

When talking about the degree of tacit understanding with his teammates, Ticino Suarez revealed: “We still have many days to adapt to each other better. After all, we still have some time before the game.” In addition to training and competition. The Brazilian player’s outgoing personality has also won the favor of his teammates. In addition to being inseparable from his fellow Lima, Ticino Suarez’s relationship with several other foreign players has also begun to get closer. This is for the coach Wang Baoshan is certainly good news.