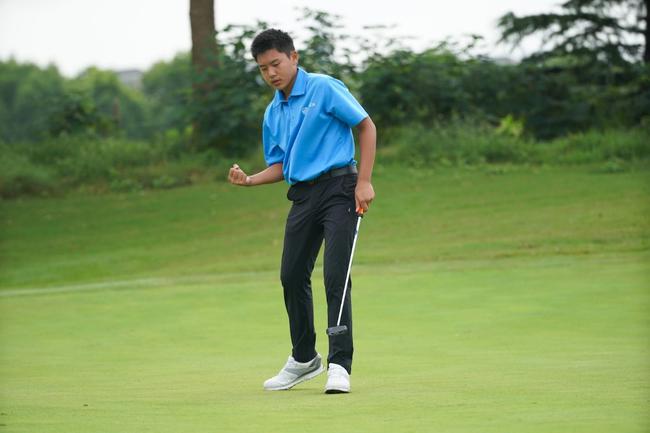 On September 26, the Buick China Junior Golf Championship entered the fourth round of the ultimate contest. Four rounds of fierce battle not only brought higher requirements to the players' physical fitness and mentality, but also demonstrated their determination to advance to the championship.

Zhou Ziqin, a men’s group A player who entered the final round by one stroke, had a Jedi counterattack in this round and tied the 54-hole leader Pan Ziyi on the first nine holes. He continued to show his strength on the last nine holes and handed over a score of -3. Pole advantage won the finals. "It's the last round. I chose to attack actively and hope to score more points. This is the first time I have won the finals. I am very excited to be able to win the championship surrounded by so many masters!"

As for the women's team, Chen Yulin, who has been suffering from a cold this week, did not give her opponent any chance in the fourth round. The Guangzhou girl who played steadily and won the championship with a huge advantage of 7 shots. "It feels like playing four rounds is really a serious challenge to physical fitness and mentality. Each round is like a five-hour test. I really have to take a good rest when I go back. But I am also honored to be ahead of the four rounds. I won the championship under the circumstances. I have not won the competition for a year and a half. I am really excited to win the next level one championship this time."

With the birth of the male and female Group A champions, the 2020 Buick China Junior Golf Championship is coming to an end. This week in Shanghai Qizhong Garden, although the players encountered heavy rain in the first round, after the training of the sub-station, the Buick Junior was more calm and calm on the court, and the results were exceptionally eye-catching. The progress of the men's group B players is even more obvious to all. Last year, the men's group B did not show a red letter after the game, but this year's leaderboard has 8 people handed in negative scores. The constant refreshing performance is the best proof of Buick Junior's continuous advancement.

At the Group A awards ceremony, Buick Golf spokesperson and "China First Sister" Feng Shanshan came to the scene to congratulate the players. "I see that many players on the leaderboard have played the scarlet letters, their results are very good, and I clearly feel the children's progress year by year. I really appreciate Buick's support for the development of China's junior golf."

In addition to supporting the contestants on site, Shanshan also launched a championship training camp for zero-based children after the game, hoping to encourage more young people to participate in golf and cultivate more reserve forces for the future. "We can't just cultivate top players, but continue to expand the base of young players. The more people who participate, the greater the probability of top players, so I support this kind of golf promotion for children with zero foundation."

At this point, this year's Buick Junior Race has successfully concluded. In this year's special environment, Buick Juniors were still struggling under various harsh conditions such as storms, scorching sun, and scorching heat during the game. The wonderful moments of sticking to the end are still memorable.

On June 20, Buick launched the first race of this year's youth series in Zhuhai, Guangdong. As the first race of a national youth race, the Zhuhai race has attracted attention from all parties. With the comprehensive and meticulous epidemic prevention work escorted by the event staff, the event was successfully held, opening the Buick Junior's strength battle this year.

In the second Guangdong race, the men's A player Xiao Jieyan showed the domineering champion and won the championship. Xiao Jieyan comes from a golf family. His mother, Lin Shaoru, was a professional champion. Xiao Jieyan, who has been fascinated by him since he was a child, has continued the family's glory. His victory shows us the strength of China's golf "back wave".

Persistence in the storm

In the third game, he moved to Jiangsu. The Buick Junior met the severe test of extreme weather. In Kunshan Xubao, wind and rain are raging, as the players said, "people are going to be blown up." However, the Buick Junior did not flinch, and continued to fight to the end under such difficult weather conditions. All players finished the race. With excellent strength and the most "burning" fighting spirit, the storm became the best testimony of Buick Junior's challenge and continuous growth.

The shortest distance, the biggest breakthrough

Zhu Yurun, a female Group A player who won second place in the last stop, once again entered the championship competition circle in the fourth East China stop. Despite the setbacks in the final round, in the face of wind and rain and the challenges of opponents, he always believed in his "Xiao Zhu", withstood the pressure, and finally reached the championship podium. From runner-up to champion, the seemingly short distance is the biggest breakthrough.

The most intense extra play

In the fifth game at Huazhong Station, there was a “tense to trembling” championship moment. Women's Group A Zeng Liqi and Zhu Yingzhi fought hard for five additional holes. As a result, Zeng Liqi clenched his teeth and insisted on winning the championship. And Liu Yujie, who was only promoted to Group B in May, also overpowered her opponents in the extra play and won the first Group B championship. The harsh test the Buick Juniors received in the extra play allowed them to sharpen their determination to win more tenaciously.

In the final round of the    race, Buick Juniors fought hard for the championship and finals tickets, and achieved great results. The first round of the game sent 10 eagles to the scoreboard. In the final six groups of competitions, five winners were the first to aspire to the championship of this group. The fiery fighting spirit of sprinting with all strength, and the dazzling results that are frequently refreshed, let us see the explosive power of Buick Junior and the fighting spirit eager to advance.

Buick Boy, see you next year!