Hupu News on October 11, "I want to be you when I grow up!" This afternoon, a huge cartoon TIFO was displayed in the stands of Stadium 12 of the Kunming Haigeng Football Base in Yunnan. Next to TIFO is 33 young and excited little boys. The girl's face. On the venue, the Women's Super League final of the 2020 season is going on. The two teams are facing Wuhan Jiangda and Jiangsu Suning.

After 90 minutes, the Wuhan team defeated Suning 4-0 and won the game. The little girls also realized their wishes in advance. The temporary heart-warming arrangements of the Football Association gave the children a big surprise after the game: they were The invitation stepped onto the competition venue, stood on the championship podium with her idol, and raised the Women's Super League championship trophy this year together! 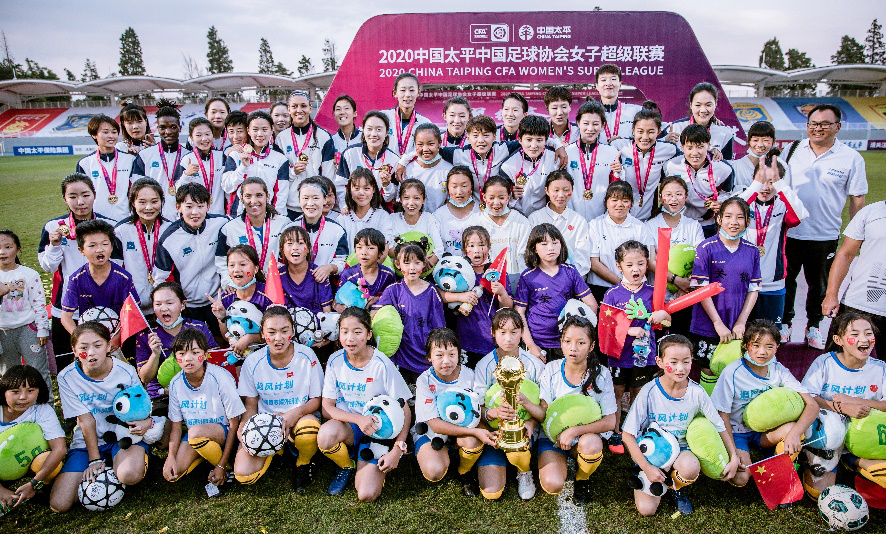 "It turns out that the real football field is so soft." 12-year-old Li Fenglan sighed with wide eyes. She is a young female football player of Yunnan Xuanwei Jingwaimingde Primary School. She has been playing football since the first grade. For 6 years, she and her friends have been training on the sand.

In addition to her teammates who came to the finals with Li Fenglan, there were also the women's football players from Kunming Guansuo Central School and Kunming Yizhong Xishan School. Because of this year's special reasons, the Women's Super League has been closed in Haigeng. There are no spectators, no on-site cheering and shouting, which also makes the Women's Super League that lacks spectators extremely deserted. Therefore, in the final finals, Alipay Charity Foundation and the Chinese Football Association invited three primary and secondary school girls who love football to the scene. Among them, Jingwai Mingde Primary School is also a rural primary school in poverty-stricken areas funded by Alipay’s “Wind Chasing Program”. 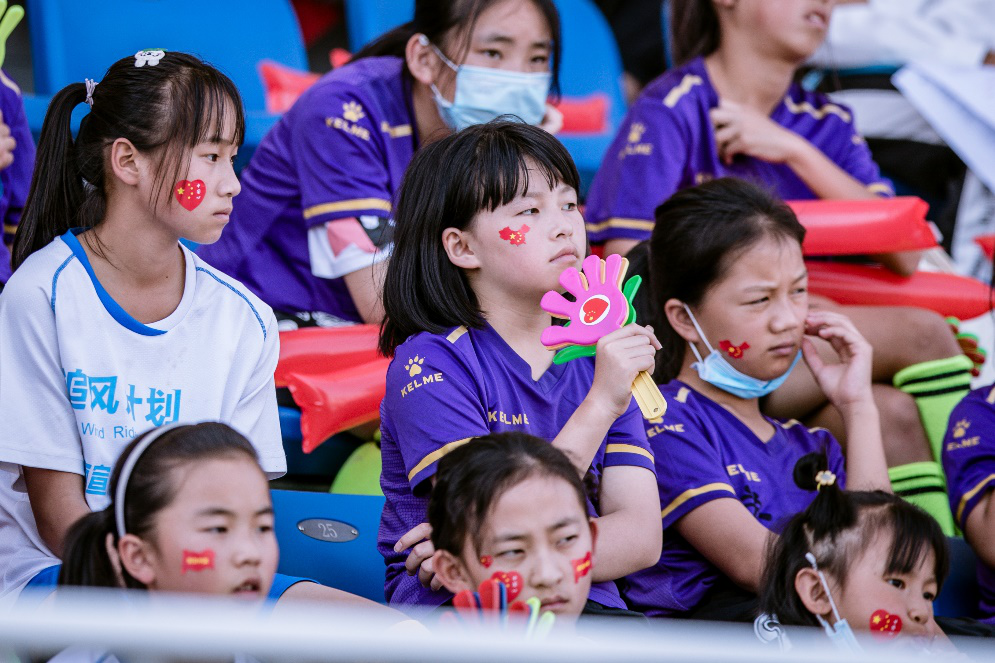 (The girls watch the game intently)

"The children heard that they are coming to Kunming, they can watch the game live, and they can also see women's football stars such as Wang Shuang and Wu Haiyan. Not to mention they are too excited. Many children say they can't sleep for several nights." Jingwai Mingde Primary School Said the football teacher Gu Peiying. The children mentioned that they wanted to bring some gifts to the big sisters of women's football. The Alipay Charity Foundation collected the children's wishes, and then found the well-known cartoonist Aman, and designed these wishes into a huge comic TIFO. The day before the game, the "chase girls" arrived in Kunming ahead of schedule, spent the afternoon painting TIFO, pressing their own handprints, and then in the stands of the finals, let the women's football big sisters see their voices . 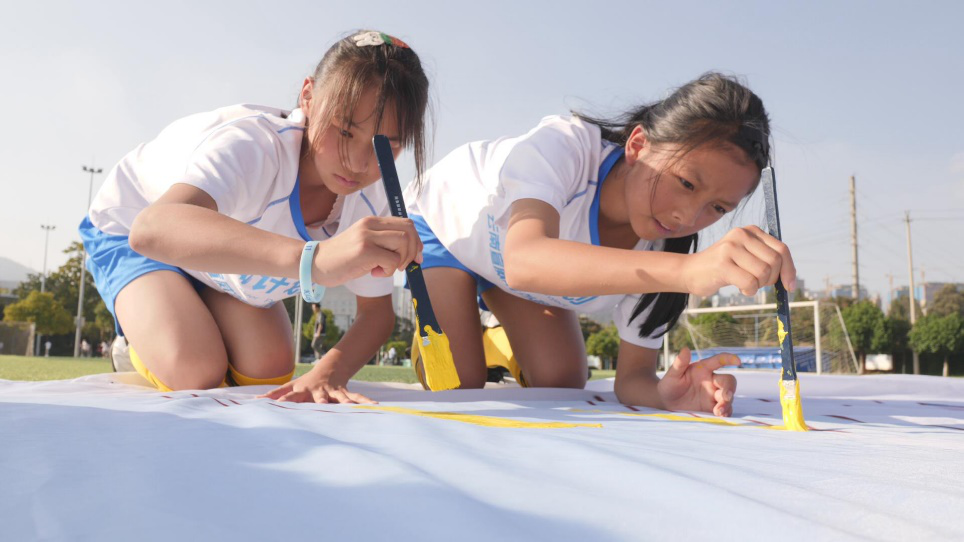 Before the game started, the girls also came to the stadium early, put their favorite stickers on their faces, blew up the inflatable sticks, and clapped their hands. The players of the two teams have just entered the stadium, and the children can't wait to start cheering on the two teams. "That number 7 is Wang Shuang, and that is Wang Shanshan..." When Wang Shuang came to the side near the stand to take a corner kick, many girls stood up excitedly and cheered their idols. 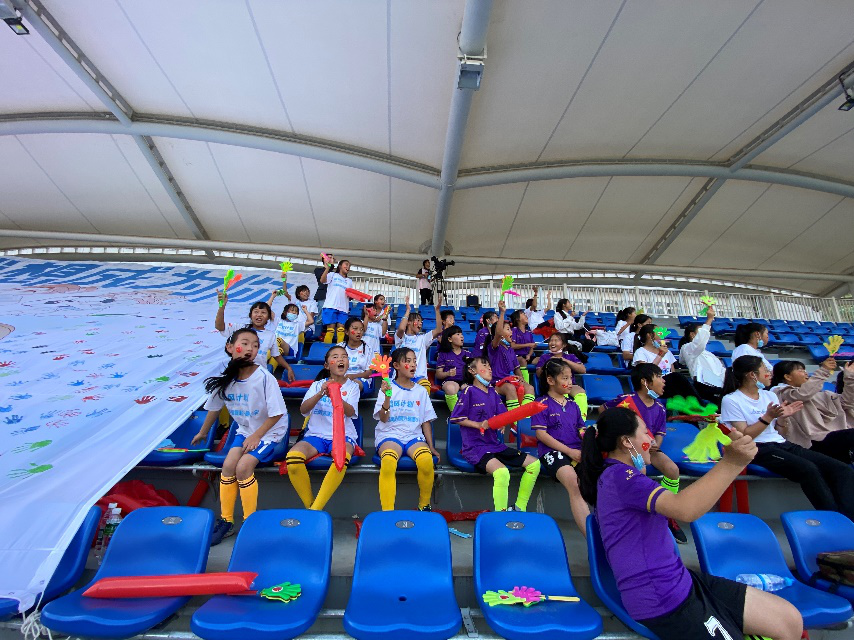 (The children cheer for the players on both sides excitedly)

"I'm so excited, I didn't expect to be so close to Sister Wang Shuang!" Li Fenglan said. Since receiving funding from the “Chasing the Wind Project” last year, Jingwai Mingde Primary School Women’s Football Team has also made great improvements in hardware facilities. A standard artificial turf football field is under preparation. More importantly, with financial support, the children have There are a lot of opportunities to get out of the mountain village, to compete or watch the game. In August of this year, they just won the championship in the youth campus football match in Qujing City. Li Fenglan also won three yuan in the final.

"Thank you for coming to the scene to cheer for us! Wang Shuang and his teammates thanked the small spectators on the sidelines after the game. The players of the two teams also came to the sidelines and gave the children autographed footballs, Various gifts such as ant dolls and ant forest energy balls...let every child come home with a full load. 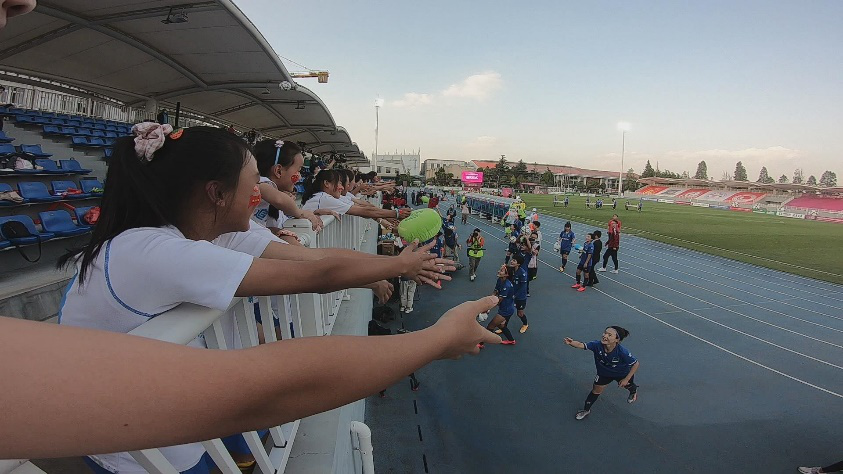 "Alipay is very interested in thinking of such activities. I believe this experience today is a very precious memory for these children, and it will also have a great motivational effect for their growth." said Sun Wen, vice chairman of the Chinese Football Association. I was completely infected by the happiness of the girls. After the game, I also walked into the stadium and took pictures with the "chase girls", "I hope they can continue to love football, and I also hope that our women's football players can become more young girls. A growing idol."