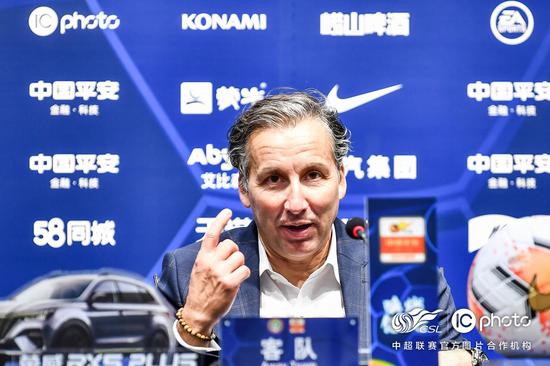 On the evening of October 23, Beijing time, the 16th round of the second stage of the 2020 China Ping An Super League continued. Wuhan Zall drew with Henan Jianye 1-1. Since Jianye defeated Zall 1-0 in the first round, in the end, Jianye defeated Wuhan Zall 2-1 with a total score of the two rounds. Jianye succeeded in relegation. After the game, Jian’s owner coach Javier attended the press conference to comment on the team’s performance in this game.

It was a very difficult game. The team defended well and did not give the opponent too many opportunities. Unfortunately, some counter-attack opportunities were not scored. The opponent's goals made us nervous for a while, but overall I am very satisfied. Worth the result.

No one can predict the result in advance, but what we can do is to do the daily training and work well in a down-to-earth manner, and the result (relegation) will naturally come. Just like our plan for this game, if we consider defending the 1-0 score, it will definitely be very difficult, so the game process is just like our plan. We scored a goal first, but we also had a chance to counterattack, but unfortunately we did not grasp it. . To

The responsibilities of a coach are not only technical and tactical, but also management. After I arrived at the team, I did not set many cumbersome rules. I have also coached in many countries, including the United Kingdom, Spain and other teams in the Super League. The basic rules of the team must be established, because you are a professional athlete and you must respect Your job has put forward some basic requirements. Our staff and players are very professional and have a strong sense of responsibility. To

Before the game, I told the players that it was not only 300 Jianye fans who came to the scene, they also represented all Jianye fans behind them. These two games are just a small goal, and we will have the strength to achieve higher goals in the future. Finally, I wish our opponent Zall the best.